The senior class sign was painted by Paul VerBurg

President of the USA: Richard Nixon/Gerald Ford
Oscar for Best Picture: The Sting
Grammy Song of the Year: The Way We Were
#1 Billboard: The Way We Were - Barbra Streisand
Super Bowl: Minnesota Vikings 7 vs. Miami Dolphins 24 on January 13th, 1974
World Series: Oakland Athletics over Los Angeles Dodgers (4-1)

The global recession deepens. The famous skeleton “Lucy” is discovered in Ethiopia which lived between 3.9 to 3 million years ago. More and more smaller digital based consumer products appear in the shops and the earliest forms of Word Processors appear which resemble a typewriter more than a computer. After the findings of the Watergate Scandal Richard Nixon becomes the first US president forced to resign from office.

Found: Class Ring: I found a class ring from the year 1974. The ring has a name inside, Steve Kurst or Kirst something like that. The ring has been in water for years and my son found it here in Ojai… I even tried to notify the paper, thinking that they would be interested but have had no luck in finding Steve… Can you help???? We have already tried to reach Steve Kwait ’74 through Classmates.com with no luck. This could be his if you know another way to reach him please try.

Ruth
Kleinsasser
Wysocki
Profile
To appear on this list click here to sign up on our database. Are you are on this list and want to update your entry? Request your private link by entering your email below.

Azusa High 70’s & 80’s Class Reunion October 22, 2018 by azusaalumni - We are excited to announce a multi-class reunion for everyone of the 70's and 80's! Continue Reading ...
Class of 1974 Shout Out! May 13, 2018 by TetonTrekker - The class of 1974 yearbook senior pages have been reloaded! But some of the information from your class is missing. Please go to your class page to see it and help us fill in the blanks. Join the discussion on our message board at Delphi Forums (free membership required).       Continue Reading ... 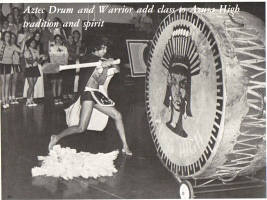